Anarion was the Second King of Gondor.  He founded the kingdoms of Gondor and Arnor in Middle-Earth with his father Elendil and brother Isildur.  The Kings of Gondor were descended from Anarion.  He ultimately fell to the great enemy Sauron, but his kingship was always remembered.
Anarion was born in Numenor in year 3219 of the Second Age.  His older brother, Isildur, had been born in 3209.  Anarion married and had four children, the youngest of which was a son named Meneldil.
Anarion's grandfather Amandil was the Lord of Andunie, a counsellor to King Ar-Pharazon of Numenor.  Ar-Pharazon captured Sauron and brought him to Numenor as prisoner.  Sauron deceived the Numenoreans and convinced them to worship Morgoth instead of Eru.  He said that if they sailed to the Undying Lands, they would become immortal like the Elves, a thing that Numenoreans desired.  However, the Numenoreans were forbidden to venture to the Undying Lands, as they were made for immortal beings only.  Ar-Pharazon built a fleet to attack the Undying Lands that set sail in 3319.  Before the fleet reached its destination, Eru intercepted and destroyed the fleet and sunk Numenor as punishment.  But Anarion and the Faithful, a group of Numenoreans who had remained loyal to the Elves and Valar, escaped.  Anarion sailed two ships to Middle-Earth, Elendil sailed four, and Isildur sailed three.  While Elendil landed in northern Middle-Earth, Anarion and Isildur sailed south to the Mouths of the Anduin and landed in the realm which they called Gondor.  Anarion and Isildur ruled Gondor together, while Elendil ruled over the entire kingdom of Gondor and Arnor from the North-kingdom.
Gondor consisted of several city-states and regions.  Anarion founded the white city of Minas Anor and the capital city of Osgiliath, and Isildur founded the city of Minas Ithil east of the Anduin.  Anarion kept one of the seven palantiri called the Anor-Stone in Minas Anor.  Anarion used the Anor-Stone to communicate with Elendil in Arnor and Isildur in Minas Ithil.
In 3429 after Sauron's return to Mordor, he attacked Gondor.  His armies took Minas Ithil by force and and Isildur and his sons Elendur, Aratan, and Ciryon fled to Arnor to receive aid from Elendil.  Anarion managed to defeat Sauron's forces in Osgiliath and Minas Anor and drive them out of Gondor.
Elendil allied with the Elves of Lindon led by Gil-galad.  In 3434, they marched to Mordor to wage war with Sauron.  The Alliance of Elves and men achieved victory over Sauron's forces on the plain of Dagorlad outside the Black Gate of Mordor and thus the War of the Last Alliance began.  The Alliance continued on through Mordor and sieged Sauron in Barad-dur for seven years.
Sauron threw down heavy stones from the peak of Barad-dur in an attempt to weaken the siege.  Anarion's helmet was crushed by one of these stones in 3440 and he was killed.  Sauron broke the siege one year later, and Elendil and Gil-galad were killed in the struggle.  Isildur, however, defeated Sauron on the slopes of Mount Doom and the kingdoms of Gondor and Arnor were not troubled by Sauron for many years.  However, they did not continue to be united.
In the end, Arnor and Gondor split.  Gondor was ruled by Meneldil and his descendants.  Arnor was ruled by Isildur's descendants.  The kingdoms were not reunited until year 3019 of the Third Age.

Year 3219 of the Second Age:
Anarion was born in Numenor.

3319:
King Ar-Pharazon of Numenor sailed to attack the Undying Lands, and as punishment Numenor was destroyed by Eru.  Anarion and the faithful escaped to Middle-Earth.

3320:
Anarion and Isildur founded Gondor.  Anarion made his home in Minas Anor and Osgiliath west of the Anduin.

3429:
Sauron attacked Gondor and took Minas Ithil by force.  Anarion was able to drive Sauron out of Minas Anor and Osgiliath.

3430:
Elendil and Gil-galad of the Elves formed an alliance.  Anarion and Isildur both joined the army.

3431:
The Alliance gathered in Rivendell.

3434:
The armies of the Alliance marched to the plain of Dagorlad outside Mordor and defeated Sauron's forces.  They continued on to siege Sauron in Barad-dur.

3440:
Sauron threw a stone from the peak of Barad-dur that crushed Anarion's helmet, killing him.  Meneldil became King of Gondor.

Anárion:
Anárion means "son of the sun" in Quenya.  It is derived from Anar meaning "sun" and ion meaning "son."

Below is a family tree of Anarion.  It is not complete with all of the Kings of Numenor, Gondor, and Arnor, but it does show the connections and origins of the royal line from the First Age to the Fourth Age. 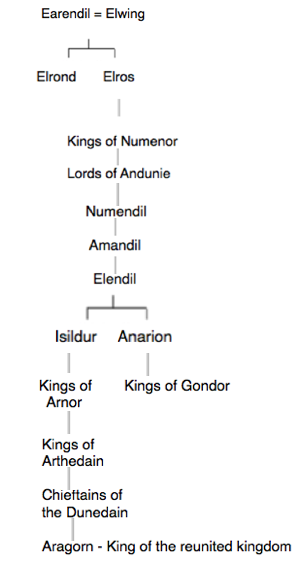