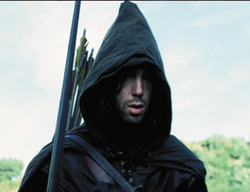 Decipher Card of Duilin
Ranger of Gondor during the War of the Ring.  Duilin was the tall son of Duilhir and the brother of Derufin.  Duilin and his brother were archers of the Blackroot Vale.
During the Battle of the Pelennor Fields on March 9, 3019 of the Third Age, Duilin led an army of Gondorian soldiers to destroy the forces of attacking Haradrim, who were riding on great beasts called Oliphaunts to battle.  Duilin arrived on March 15.
Duilin led his force too close to the Oliphaunts because he wanted to shoot their eyes.  Duilin and his company were trampled to death, along with his brother Derufin.

The Lord of the Rings; The Return of the King: "Minas Tirith," page 43; "The Battle of the Pelennor Fields," pages 124-125
The Silmarillion - Appendix: "Elements in Quenya and Sindarin Names," definition and translation of ruin
The History of Middle-earth, Volume V, The Lost Road and Other Writings: "The Etymologies"
All Pages Copyright © 2010, The Middle-Earth Encyclopedia