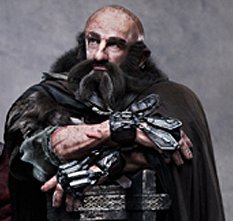 Graham McTavish as Dwalin in the Hobbit movie
Dwarf of the line of Durin; member of Thorin & Company.  Dwalin was the younger brother of Balin.  He was the son of Fundin.  Dwalin was born in the year 2772 of the Third Age.
Dwalin was a peculiar looking Dwarf.  He had a blue beard, which was unusual for Dwarves.  He also wore a dark green hood
In 2799, Dwalin's father Fundin died in the Battle of Azanulbizar.  In 2841, Dwalin accompanied Thrain II on his expedition to reclaim the Lonely Mountain.  The expedition failed, for Thrain was captured by Sauron on the ouskirts of Mirkwood and brought to Dol Guldor where he was imprisoned for the rest of his life. Though Balin and Dwalin tried to find Thrain and rescue him, it was no use; they could not find him.
In 2941, Dwalin was chosen to accompany Thorin and his company of Dwarves on a quest to reclaim the Lonely Mountain and win back their riches from the great dragon Smaug.  On April 26, the company arrived at Bag End, the home of Bilbo Baggins.  There, Dwalin played his Viol over tea.
The company faced many challenges.  Dwalin was the first to note Thorin's absence after being rescued from the Great Spiders of Mirkwood.  When Bilbo rescued the Dwarves from imprisonment in the Elvenking's Halls, they reached the Lonely Mountain.  Smaug was soon slain, and the Battle of Five Armies took place.  Fili, Kili, and Thorin were all killed.
Dwalin settled thereafter in the Lonely Mountain.  In 2989, Balin led a fateful expedition to reclaim the mines of Moria, but it is known that Dwalin did not accompany his brother.  Dwalin was alive after the time of the War of the Ring.
Dwalin's date of death is disputed.   In The Lord of the Rings: Appendix A, his date of death is incorrectly recorded as 3112 of the Third Age which is impossible because there was no such year; the Third Age ended in 3021.  It is possible that he died in what would have been 3112 of the third Age if that age had continued, but this corresponds with year 91 of the Fourth Age, making Dwalin three-hundred fourty at the time of his death.  This age far exceeds the average lifespan of a Dwarf.  However, there is no source to contradict this date of death, so Dwalin's true date of death remains unknown.

Dwalin comes from the Old Norse name Dvalin, who is one of the dwarves who appears in an Old Norse poem called Voluspa.  It translates as "dawdler," possibly suggesting the nature of this Dwarf.