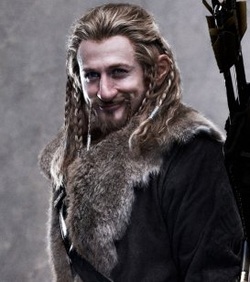 Fili played by Dean O'Gorman in The Hobbit movie
Dwarf of Thorin and Company; nephew of Thorin Oakenshield.  Fili was born in the Blue Mountains in the year 2859 of the Third Age.  He was the son of Dis, the younger sister of Thorin Oakenshield.  Fili had a younger brother named Kili.  Fili had a long nose and yellow beard, and he wore a blue hood.  He had very keen eyes.
In the year 2941 of the Third Age, Fili and Kili were chosen to join their uncle in a quest to reclaim the Lonely Mountain and their riches there from Smaug the great dragon.  There were also another nine Dwarves in the company.
On April 26, 2941, the Dwarves arrived at the house of Bilbo Baggins, a Hobbit of the Shire.  The wizard Gandalf thought this Hobbit should accompany the quest as their burglar.  Over tea, Fili played the fiddle.  After tea, Fili kindly helped Bilbo wash dishes.
The company started their quest the next day.  When a storm struck near the High Pass, Fili and Kili found a cave which turned out to be the Front Porch, a secret entrance to Goblin-town.  The Company was captured by Goblins, but Gandalf  came to the rescue.  He rescued all but Bilbo, who ended up wandering the tunnels under the Misty Mountains until he found the One Ring.  However, Bilbo was reunited with the Company the next day.
In Mirkwood, the Company needed to cross the Enchanted Stream, and Fili found an oarless boat in the middle of the stream.  He got the boat using a rope with a hook on the end.  Fili then used another to keep rowing dwarves across, since no one could touch the water because it caused drowsiness.
Later on in Mirkwood, Great Spiders caught the Dwarves in their webs.  Bilbo freed Fili, and the two of them freed the rest of the company.  Fili had spider webs all over his beard, so he cut it off.
The Dwarves were caught by Elves and again Bilbo freed them and they flowed down the Forest River in barrels.  Bilbo unleashed Fili first so he could help free the others.  Fili met the Master of Lake-town with the company.
At the Lonely Mountain, Fili checked the Front Gate to see if it was okay to enter.  When Smaug emerged from the mountain, he attacked Dale.  Fili and Kili found harps in Smaug's lair.  Soon after, Fili and Kili were sent to recapture several run-away ponies.
In the Battle of Five Armies against the Orcs and Wargs, Fili and Kili fought.  They aggressively defended their uncle and died.  Thorin was fatally wounded, soon dying of his wounds.

Notice:  On page 154 of The Hobbit, Tolkien states that Fili is the youngest of the Dwarves, but there is a clear contradiction in The Lord of the Rings, Appendix A in the genealogical table, where it clearly states that Kili was younger than Fili.

The name Fíli is Old Norse for "file."  There is a dwarf named Fíli who appears in the Old Norse poem Voluspa.