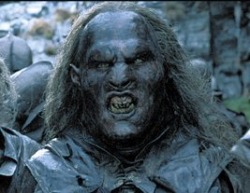 Robbie Magasiva as Mauhur in the New Line film
Orc of Isengard responsible for reinforcements that would help the company of Ugluk.  Mauhur was probably an Uruk-Hai.  On the night of February 28, 3019 of the Third Age, Mauhur led a force of reinforcements through the eaves of Fangorn Forest.  Ugluk's company had been surrounded the Riders of Rohan led by Eomer, but Ugluk did not attack them because he counted on reinforcements from Mauhur.
Mauhur's force attacked the Rohirrim from behind.  However, there were enough Riders of Rohan for some of them to repsond to Mauhur's attack, while others could close in upon Ugluk's company.  Ugluk's prisoners Merry Brandybuck and Pippin Took were able to escape the skirmish and fled into Fangorn Forest.  Mauhur's entire company was slaughtered, and the Rohirrim burned the dead bodies of the Orcs.