The Lord of the Rings, Appendix B: "Later Events Concerning the Members of the Fellowship of the Ring"

2982
Merry was born in Brandy Hall in Buckland to Saradoc and Esmeralda Brandybuck.

3000
Merry saw Frodo using his Ring to hide from Otho and Lobelia.  The Ring made Bilbo become invisible.

September 22, 3001
After attending Bilbo's Farewell Party, Merry helped Frodo sort out his things after Bilbo's departure from the Shire.

3018
September 23: After helping Frodo buy a house at Crickhollow, Merry stationed himself in Bukland and waited for the arrival of Frodo, Sam, and Pippin.
September 25: At the Bucklebury Ferry, Merry met up with the three companions.  In Crickhollow, he revealed his knowledge of the quest and how he intended on joining.
September 26: Merry and his companions left the Shire and entered the Old Forest.  At the eastern borders, they were attacked by Old Man Willow and saved by Tom Bombadil.
September 28: In the Barrow-downs, the companions were captured in a Barrow by a Barrow-wight.  They were saved by Tom Bombadil, and before setting out to Bree, they each took a sword of the Dunedain.
September 30: In Bree, the Hobbits met Aragorn and set out with him.  Merry's ponies were let free by evil folk.
October 25: In Rivendell, at the Council of Elrond, Merry offered to join the Fellowship.
December 18: Merry was allowed to join the Fellowship.
December 25: The Fellowship left Rivendell and headed South.

3019
January 13: Merry gave Gandalf a clue of how to open the West gate of Moria.  Frodo was attacked by the Watcher in the Water.
Next few days:  The Fellowship travelled through Moria.
Early February: The Fellowship reached Lothlorien.  They left in late February.
February 26: At Amon Hen, Merry and Pippin were kidnapped by a clan of Uruk-Hai.
February 29: The Riders of Rohan slaughtered all of the Orcs who held Merry and Pippin captive.  They escaped into Fangorn and met an Ent named Treebeard.
February 30: Merry and Pippin spent the days of the Entmoot with Quickbeam.
March 2: At the end of the Entmoot, the Ents decided that they must go to war.  They flooded Isengard.
March 5: Merry was reunited with Gandalf, Aragorn, Legolas, and Gimli by this time.
March 6: Merry became King Theoden's esquire.
March 9: Merry and Theoden rode to Dunharrow with Rohan's warriors.
March 10: Though Merry was told not to go to war, he rode in secret with Eowyn.
March 15: At the Battle of the Pelennor Fields, Merry and Eowyn killed the Witch-king of Angmar after the death of Theoden.  They were mended at the Houses of Healing.
August 14: Merry was given the Horn of the Mark as a mighty gift from Eomer.
October 30: Merry returned to the Shire with Frodo, Sam, and Pippin.  It had been conquered by Ruffians led by Saruman.
November 2: Merry sounded the Horn of the Mark in Bywater to prepare for Battle.
November 3: The conflict between the Hobbits and the Ruffians erupted in the Battle of Bywater.  The Ruffians were banished from the Shire.

11 of the Fourth Age:
Merry was named Master of Buckland at the death of his father.

13
Merry was named Counsellor of the North-Kingdom of Arnor by King Aragorn.

15
Aragorn visited Sam, Merry, and Pippin in the Shire.

63
Merry and Pippin journeyed to Rohan to accompany King Eomer to his deathbed.

64
Merry and Pippin lived out their days in Gondor and were buried in a royal tomb.

Merry:
Merry was a nickname for Meriadoc.
It is a word meaning "having high spirits."

Kalimac Brandagamba:
Kalimac is the Hobbitish name for Meriadoc.

Meriadoc the Magnificent:
Merry was called this by his fellow Hobbits who realized that he played a major role in defending the Shire against the Ruffians in the Scouring of the Shire.

Counsellor of the North-Kingdom of Arnor:
As Master of Buckland, Merry was given this noble title by Aragorn.

Merry was portray by Dominic Monaghan in the New Line Cinema film trilogy of The Lord of the Rings directed by Peter Jackson.
The painting on the top left of the gallery is of Merry with his sword by Inger Edelfeldt.  Next to it is a painting of Merry riding Stybba by Ted Nasmith.  On the bottom right is a painting of Merry captured by the Uruk-Hai clan and is illustrated by Alan Lee. 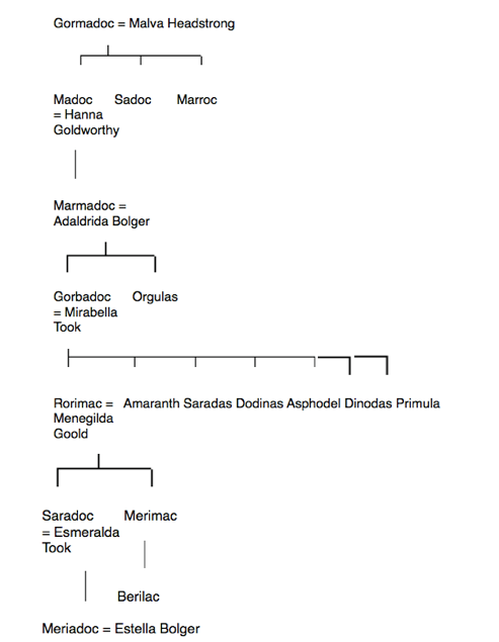