The History of Middle-earth, Volume IX, Sauron Defeated: "Part One: The End of the Third Age: XI. The Epilogue," page 115

2990
Pippin was born in Tuckborough in Took Land to Paladin and Eglantine Took.

Years leading up to 3001:
Pippin and Merry made friends.

3018
September 23: Pippin left Bag End with Sam and Frodo.  They set out for Crickhollow.
September 24:  The Hobbits had several close calls with the Nazgul.
September 25: The Hobbits were given supper by Farmer Maggot.  They met Merry in Buckland.  In Crickohollow, Merry and Pippin announced that they were joining Frodo on his quest.
September 26: Pippin and his companions left the Shire and entered the Old Forest.  At the eastern borders, they were attacked by Old Man Willow and saved by Tom Bombadil.
September 28: In the Barrow-downs, the companions were captured in a Barrow by a Barrow-wight.  They were saved by Tom Bombadil, and before setting out to Bree, they each took a sword of the Dunedain.
September 30: In Bree, the Hobbits met Aragorn and set out with him.  Merry's ponies were let free by evil folk.
October 25: In Rivendell, at the Council of Elrond, Pippin offered to join the Fellowship.
December 18: Pippin was allowed to join the Fellowship.
December 25: The Fellowship left Rivendell and headed South.

3019
January 13: Pippin asked Gandalf many annoying questions at the West gate of Moria.  Frodo was attacked by the Watcher in the Water.
Next few days:  The Fellowship travelled through Moria.  Gandalf was temporarily lost to the Balrog.
Early February: The Fellowship reached Lothlorien.  They left in late February.
February 26: At Amon Hen, Merry and Pippin were kidnapped by a clan of Uruk-Hai.
February 29: The Riders of Rohan slaughtered all of the Orcs who held Pippin and Merry captive.  They escaped into Fangorn and met an Ent named Treebeard.
February 30: Pippin and Merry spent the days of the Entmoot with Quickbeam.
March 2: At the end of the Entmoot, the Ents decided that they must go to war.  They flooded Isengard.
March 5: Pippin was reunited with Gandalf, Aragorn, Legolas, and Gimli by this time.  He looked into the palantir and was brought to Minas Tirith.
March 9: Pippin and Gandalf reached Minas Tirith and Pippin offered Denethor his service.
March 10: Pippin met Faramir in the city.  The young war captain told Gandalf that Pippin was not the first Halfling to have crossed his path.
March 15: At the Battle of the Pelennor Fields, Pippin found Merry.  He brought him to the Houses of Healing.  He also saved Faramir from his father Denethor.
March 18:  The Western forces set out for the Black Gate where war would occur.
March 25:  At the Battle of Morannon, Pippin killed a Troll and named his sword "Troll's Bane."  Sam and Frodo successfully destroyed the Ring and Sauron was destroyed.
October 30: Pippin returned to the Shire with Frodo, Sam, and Merry.  It had been conquered by Ruffians led by Saruman.
November 3: The conflict between the Hobbits and the Ruffians erupted in the Battle of Bywater.  The Ruffians were banished from the Shire.  Pippin was noted to have been a great leader on this date in the Roll.

6 of the Fourth Age:
Pippin married Diamond of Long Cleave.

13
Pippin was named Thain and Aragorn made him Counsellor of the North Kingdom.

15
Aragorn visited Pippin, Sam, and Merry in the Shire.

63
Merry and Pippin journeyed to Rohan to accompany King Eomer to his deathbed.

64
Merry and Pippin lived out their days in Gondor and were buried in a royal tomb.  Pippin officially published the Red Book into the Thain's Book.

Peregrin:
Peregrin is a name of unknown meaning.  It could be related to Peregrine meaning "to have a habbit of daydreaming or wandering off."

Pippin:
Pippin has several meanings.
It could mean a brave or courageous person who is well-known.
It could be a reference to the apple called Pippin.
He was also simply called Pip.

Thain:
Pippin was named Thain of the Shire at the death of his father Paladin.

Counsellor of the North-Kingdom of Arnor:
Pippin was named Counsellor by Aragorn as a reward for his courageous acts during the War of the Ring. 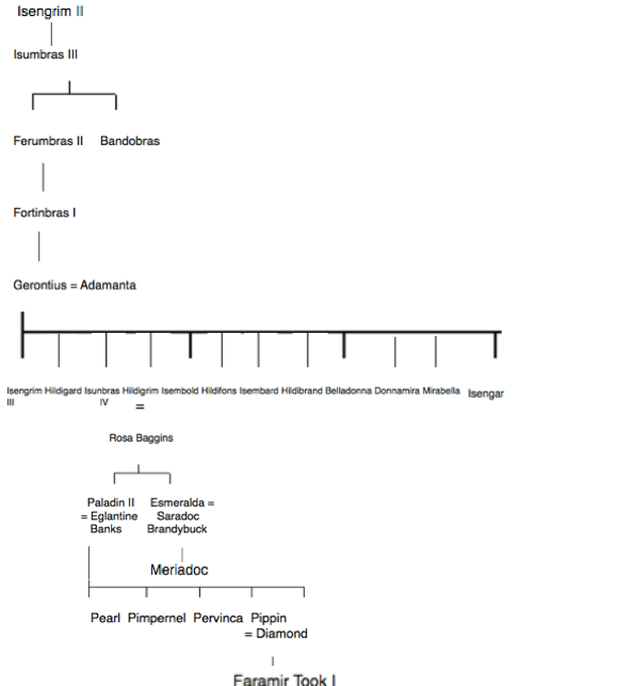