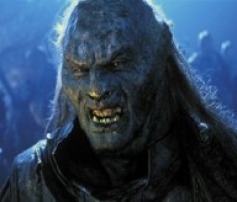 Nathaniel Lees as Ugluk in the New Line film
Uruk-Hai captain of Isengard.  Ugluk was a large, dark, cunning Orc.  The Uruk-Hai were taller, broader, and stronger than other variants of Orcs.  They were not bothered by sunlight unlike Orcs from Mordor.  Ugluk and his Orcs bore the White Hand of their master Saruman, and they were fed man-flesh.
On January 18, 3019 of the Third Age, Orc messengers from Moria arrived at Isengard with news of the Fellowships' movements through Moria.  The Fellowship possessed the One Ring, which Saruman desired greatly.  Saruman sent forth a group of Uruk-Hai scouts led by Ugluk to hunt down the Fellowship.  Ugluk did not know what the Fellowship possessed, but he assumed it was some sort of weapon that Saruman needed for the war.
Ugluk reached the Misty Mountains on January 22 where he was joined by a force of Mountain Orcs.  Ugluk and his company captured Gollum on January 24 and from him they were able to find out that the Halflings possessed the weapon that was wanted by Saruman.  Ugluk sent messengers back to Isengard to tell what he had discovered and to request more Uruk-Hai.  More Uruk-Hai joined Ugluk's force, and the number of Uruks in Ugluk's company increased to about 80 and the number of Mountain Orcs was at least 100.  The Uruks who joined Ugluk's company from Isengard arrived with a message from Saruman saying that the Halflings were to be brought to Saruman alive and unspoiled, but the rest of the Fellowship was to be killed.
Ugluk's large company searched northern Rohan for the Fellowship on February 6.  They traveled south to Sarn Gebir where they were met by a company of Orcs from Mordor led by Grishnakh on February 10.  Grishnakh and his troop watched out for the Fellowship on the eastern side of the Anduin, while Ugluk and his troop remained on the western side until they were pursued east by the Rohirrim.  Ugluk's force evacuated to the Emyn Muil, where they were reunited with Grishnakh's company on February 25.  On February 26, the two companies attacked the Fellowship at Amon Hen and they killed Boromir and kidnapped Merry Brandybuck and Pippin Took, mistakenly thinking that these were the Halflings who had what Saruman wanted.
Grishnakh believed that the Halflings should have been taken to Mordor, but Ugluk argued that he was under strict orders to take them to Isengard.  Ugluk cut off the heads of two Orcs from Mordor who tried to argue with him, and Grishnakh left the group to seek counsel from one of the Nazgul.
The Uruks and Orcs journeyed west towards Isengard.  An Uruk named Snaga reported to Ugluk that he had seen Riders of Rohan in the distance, which greatly angered Ugluk.  He gave the Halflings Orc-drink and made them pick up the pace to escape the Rohirrrim.  Orcs from the Mountains suddenly became fearful when they heard that there were Riders from Rohan nearby, because they greatly feared the Rohirrim.  Many Mountain Orcs tried to run into Fangorn Forest but the Uruks forced them to remain with the company.  Grishnakh and the other Orcs from Mordor caught up with the Uruk-Hai and decided to remain with the Halflings.
On a hillock on the borders of Fangorn on February 28, the Uruk-Hai were surrounded by the Rohirrim.  Ugluk did not feel the need to attack the Rohirrim because he had been assured that aid was coming from Mauhur.  Ugluk ordered his company to remain calm and not to slay the Halflings under any circumstances, unless the Rohirrim attacked.  However, Grishnakh took the Hobbits into isolation and searched them for the One Ring, because he wanted the Ring to be brought to Mordor.  Grishnakh was killed by a Rider of Rohan and the Halflings escaped into Fangorn Forest.  In the early hours of February 29, the Rohirrim broke the Uruks' defenses and slew them all.  Ugluk stood his ground while many Orcs attempted to flee into Fangorn and were killed.  Ugluk was killed in combat with Eomer.  The Rohirrim piled the dead Orcs and burned them after the skirmish was won by Rohan.