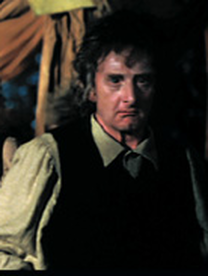 Otho played by Peter Corrigan in the New Line film
Hobbit of the Shire; cousin of Bilbo Baggins.  Otho Sackville-Baggins was born in the year 2910 of the Third Age.  He was the son of Bilbo's uncle Longo Baggins and Camellia Sackville.  Because he was the son of Camellia, Otho became head of the Sackville family.  He had a life-long ambition to become head of the Baggins family as well.
Otho Sackville-Baggins married Lobelia Bracegirdle.  They owned a plantation in the Southfarthing where they grew pipe-weed.  In 2964, they had a son named Lotho.  Otho lived in waiting for Bilbo, head of the Baggins family, to die.  When this occurred, Otho would inherit the title of Head of the Baggins family.
In 2941, Bilbo disappeared for a year and was declared dead.  Otho and Lobelia began preparing to move into his home of Bag End when he suddenly returned the next year.  Both Otho and his wife were grieved by his return.
Otho and Lobelia attended Bilbo's Farewell Birthday Party in 3001.  There, they were outraged when Bilbo used his Ring to disappear suddenly, and they left the party.  Otho showed up at Bag End the next day and he demanded that Frodo show him Bilbo's will, but sure enough it was clear as day, having been signed by seven witnesses.
Otho died in 3012.  It was not until six years after his death that Lobelia was able to purchase Bag End. 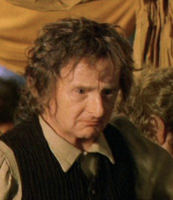 Peter Corrigan as Otho Sackville-Baggins in the New Line film

Otho was born with the name Otho Baggins, but he hyphenated his mother's maiden name in order to become head of the Sackville family.