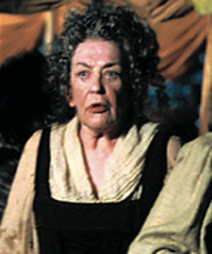 Elizabeth Moody as Lobelia in the New Line film
Hobbit of the Shire; wife to Otho Sackville-Baggins.  Lobelia Bracegirdle was born in 2918 of the Third Age.  She was the daughter of Blanco Bracegirdle and Primrose Boffin.  Lobelia had an older brother named Bruno.  Their family lived in Hardbottle in the Northfarthing of the Shire.
Lobelia Bracegirdle married Otho Sackville-Baggins and thus became the cousin-in-law of Bilbo Baggins.  The Sackville-Bagginses had high hopes of one day ruling the Baggins family from Bilbo's extravagant Hobbit-hole of Bag End.
In 2941, Bilbo disappeared for a year on the quest of Erebor and Lobelia thought her time had come.  She began measuring the rooms in Bag End with her husband, and they prepared to move in with all of their furniture and belongings when Bilbo was finally declared dead.  Lobelia was outraged when Bilbo returned home the next year.
When Bilbo took in his young cousin Frodo Baggins in to live with him at Bag End, Lobelia was again outraged.  She constantly nagged Bilbo for Bag End. When Bilbo departed from the Shire in 3001, he gifted her with nothing more than a few of Bag End's old spoons.  Furious, Lobelia insulted Frodo as he escorted her out of the house, saying he was nothing more than a Brandybuck.  As it turned out, she had stolen several of Bag End's prized possessions and hidden them in her umbrella.
Otho died in 3012 after never having inhabited Bag End, but Lobelia did not give up her desire for it.  To her delight, Frodo sold Lobelia Bag End when he left the Shire in 3018, and she purchased the property for an extremely low price.  Though the old woman was widowed, she moved in with her son Lotho.  With the desire for power running through his veins, Lotho began taking over the Shire and industrializing it.  He was being used by an evil wizard called Saruman who wanted to invade the Shire, and in September of 3019 this wizard took power from Lotho.  Saruman brought in a force of evil men to occupy the Shire and scour it.  When Lobelia began using her umbrella as a weapon against the Chief's Men, she was imprisoned in the Lockholes.
On November 4, 3019, Frodo returned to the Shire and released Lobelia from prison.  She was very frail by that time, though she was content when all of her fellow Hobbits cheered at her release.  However, she soon became depressed when she learned of Lotho's death, and so she returned Bag End to Frodo and retired back to Hardbottle where she died in 3020.  Lobelia left what money she had at the time of her death to those Hobbits who had lost their homes and families during the War of the Ring.

A lobelia is a blue flower, and this Hobbit was named after them.