King of the Dead and the Dead 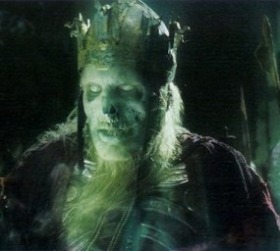 Paul Norell as King of the Dead in the New Line film
Dead men who inhabited the Paths of the Dead.  The Dead were ghosts of men who had once lived in the White Mountains.  These men were known as the Men of the Mountains and, in their late existence, the Oathbreakers.  The King of the Dead and his people were related to the Men of Dunland, but they had become a separate culture.  In life, the Men of the Mountains probably had darkish or olive-colored skin, dark hair, and dark eyes.  In death, the Dead looked like this, but they had a greenish color surrounding their bodies.  Their bones were also visible, though in death they were merely ghosts who could not take physical form.
In life, the Men of the Mountains originally worshipped Sauron because many of the native peoples of Middle-Earth were forced to do so.  The Men of the Mountains had been cruel in their early years, and they had driven a group of Aborigines called the Druedain out of Dunharrow.  However, when Gondor came into power in 3320 of the Second Age, the King of the Dead swore allegiance to King Isildur of Gondor.  The King of the Mountains swore at the Stone of Erech that he would serve Gondor if they ever summoned his people to war against Sauron.
In the War of the Last Alliance, King Isildur of Gondor summoned the Men of the Mountains to aid in the war against Sauron.  The men refused to fight their former god Sauron, and thus Isildur cursed them.  The men hid away in the White Mountains where slowly and naturally they died off, but their dead souls lingered in a state of "living death" due to Isildur's curse.  The Oathbreakers could not fully embrace death until they had fulfilled their oath to Gondor.  The Dead continued to haunt the passage in the White Mountains tha became known as the Paths of the Dead, and their spirits occasionally ventured out into Harrowdale and the Blackroot Vale.  None who ventured into the Dead King's domain ever returned alive.
In 2570 of the Third Age, Baldor, the son and heir of King Brego of Rohan, ventured in the Paths of the Dead.  The Dead followed him secretly into an evil temple hall where they broke his legs and waited for him to die.
On March 8, 3019, Aragorn entered the Paths of the Dead with the Grey Company, which included both Legolas and Gimli.  Aragorn was determined to make an alliance with the Oathbreakers.  He thought that he could persuade them to fulfill their oaths and fight for Gondor at last.  Aragorn summoned the Dead to the Stone of Erech, and when they arrived he asked them why they had come.  They revealed to Aragorn that they very much wanted to fulfill their oaths and have peace, and Aragorn then requested that they help Gondor fight the forces of Sauron.  When the King of the Dead doubted him, Aragorn revealed that he was Islidur's heir.  The Dead agreed to serve Aragorn as long as they could have peace afterwards.  Aragorn led the Dead about 280 miles to Pelargir on the Anduin.  There the Dead joined the Grey Company in seizing a fleet of ships sailed by the Corsairs of Umbar who planned to attack Gondor from the Anduin.  Aragorn would sail the fleet upriver to Minas Tirith where he would aid in Gondor's fight against Mordor in the Battle of Pelennor Fields.
After they had captured the entire fleet, the Dead told Aragorn that they had fulfilled their oaths to Gondor, and they requested peace at last.  Aragorn allowed them to finally die properly, and they were released and the curse was broken.
In Peter Jackson's film adaptation of The Lord of the Rings, the Dead followed Aragorn to Minas Tirith where they helped win the Battle of the Pelennor Fields.  This did not occur in the book.

City of the Dead in the New Line Film