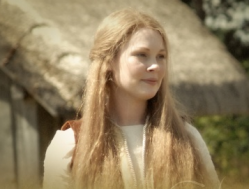 Beth Aynsley as Gilraen in 'Born of Hope'
Wife to Arathorn II, Chieftain of the Dunedain; mother of Aragorn II, King Elessar.  Gilraen was born in year 2907 of the Third Age.  She was the daughter of Dirhael and Ivorwen.  The family lived in a hidden settlement in Eriador.  Both of Gilraen's parents were given the gift of foresight.
In 2929, when Gilraen was 22 years old, she met Arathorn.  He was the son of Chieftain Arador of the Dunedain.  Arathorn begged Dirhael and Ivorwen for Gilraen's hand in marriage.  Gilraen's father Dirhael predicted that Arathorn would not live long, but her mother Ivorwen convinced him that the match was a wise one.
In 2931, Gilraen gave birth to their only child Aragorn.  Just two years later in 2933, Arathorn was killed by orcs.  So thus it was that the two-year-old Aragorn became Chieftain of the Dunedain, though he was sent to Rivendell to be fostered by Elrond before he could claim lordship of the Dunedain.  Gilraen and Aragorn moved to Rivendell, where Aragorn lived until he was 20, and realized he was the heir of Isildur.  Aragorn had high hopes of reclaiming the throne of Gondor.
Gilraen did not live out the rest of her days in Rivendell.  She moved back north to Eriador to live closer to her people.  She seldom saw her son, for he journeyed throughout the entirety of Middle-Earth.  He visited her on rare occasions, and one time she told him that her days were numbered.
Gilraen died in the winter of 3007.  Her son became High King of the Reunited Kingdom of Gondor and Arnor twelve years later in 3019.

The grave of Gilraen in the New Line film

Tolkien once wrote that Gilraen is intended to mean "one adorned with a tressure set with small gems in its network."