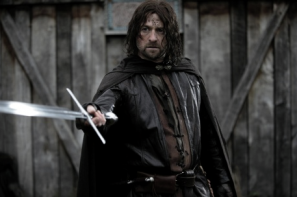 Christopher Dane as Arathorn II in 'Born of Hope'
Fifteenth Chieftain of the Dunedain; father of Aragorn II, King Elessar.  Arathorn II was born in year 2873 of the Third Age.  He was the son of Chieftain Arador.  Arathorn II was a stern individual who was skilled with a blade.
Arathorn II was very interested in a marriage to Gilraen.  Her father Dirhael did not support the match because he thought Gilraen was too young and also because he foresaw that Arathorn would be a short-lived Chieftain.  Nevertheless, Gilraen's mother Ivorwen supported the match, telling her husband that if Arathorn and Gilraen wed, hope would still remain for the Dunedain.  Because Ivorwen successfully convinced her husband that the match was a good one, Arathorn II married Gilraen in 2929.
In 2930, Arathorn's father Arador was killed by Hill-Trolls in the Coldfells north of Rivendell.  Arathorn succeeded his father as Chieftain.  The next year, Arathorn and Gilraen had their only child, a son named Aragorn.
In 2933, Dirhael's prediction about the fated Arathorn came true.  Arathorn went to fight off Orcs with Elladan and Elrohir, twin sons of Elrond.  It was then that Arathorn's eye was pierced and he was killed.  The two-year-old Aragorn became Chieftain of the Dunedain, but he went to live in Rivendell to be fostered by Elrond until he was of age.  Aragorn became King of the Reunited Kingdom of Gondor and Arnor in 3019.

The name Arathorn means "king-eagle" in Sindarin.  It is derived from ara meaning "king" and thorn from þoronomeaning "eagle."  There was an earlier Chieftain named Arathorn I.