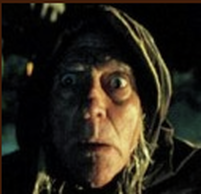 Martyn Sanderson as Harry Goatleaf in the New Line film
Gatekeeper at Bree.  Harry Goatleaf managed the West-Gate of Bree.  He was in the service of the Southerners at the time of the War of the Ring.
On Monday, September 26, 3018 of the Third Age, Harry was approached by two Nazgul who spoke to him and left him shivering in the cold.  The Nazgul had taken the disguise of dark hooded figures on horseback, which inspired fear in the heart of Harry Goatleaf.
On September 29, Frodo Baggins and his companions arrived.  Harry found it curious that these Hobbits came from the Shire, but when he asked their name and intentions in Bree, Merry Brandybuck avioded his questions.
Harry Goatleaf was in the Common Room at the Prancing Pony that evening.  He witnessed Frodo accidentally put the One Ring onto his own finger and disappear.  Harry left with Bill Ferny and a squint-eyed Southerner.  Later on, Aragorn advised Frodo that Breelanders such as Harry Goatleaf, Bill Ferny, and possibly others would tell the Nazgul of his presence at the inn out of fear.  Sure enough, later that night, the Nazgul sacked the Hobbits' empty room.
In early 3019, fighting broke out in Bree between the Bree-folk and the Southerners.  Both Harry Goatleaf and Bill Ferny sided with the Southerners.  When the Southerners were defeated and expelled from Bree later that year, Harry accompanied them out, but his fate remains unknown. 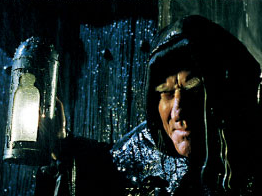 Martyn Sanderson as Harry Goatleaf in the New Line film

Goatleaf is the name of a plant.  It is the same thing as honeysuckle.