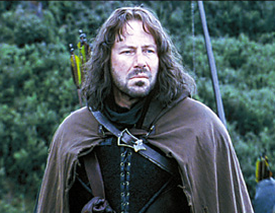 Alistair Browning as Damrod in the New Line film
Ranger of Ithilien descended from the Dunedain.  Damrod was the companion of Mablung and a loyal member of Faramir's company.  He patrolled during the War of the Ring in the late Third Age.  Damrod wore green gauntlets clad in green and brown of varied hews.  He was tall and used a sword and arrows as weaponry.  Damrod had dark hair and grey eyes.
Damrod watched over Frodo Baggins and Samwise Gamgee on March 1, 3019 while Faramir and his men ambushed a force of Haradrim marching to Mordor to fight under Sauron.  It was then that Damrod revealed that he had little, if any, hope for his country, stating that "the days of Gondor are numbered, and the walls of Minas Tirith are doomed."
On the way to Henneth Annun, Damrod and Mablung remained watch-guards of the Hobbits.  At Henneth Annun, Mablung made a night patrol that captured Gollum at the Forbidden Pool, after he had been spotted by Anborn on March 7.
Damrod's fate is unknown.  It is possible that he died during the war, or that he survived to live in Gondor until his natural death.

Damrod translates as "hammerer of copper or metal."  It is derived from dam meaning "hammer" and rod meaning "copper" or "metal."

The Lord of the Rings; The Two Towers: "Of Herbs and Stewed Rabbit," pages 264-270; "The Window on the West," pages 276-277, 281-282
The History of Middle-earth, Volume V, The Lost Road and Other Writings: "The Etymologies," definitions and translations of ndam and rauta.
All Pages Copyright © 2010, The Middle-Earth Encyclopedia