3018
April 13: Sam was gardening and heard Frodo and Gandalf discussing the One Ring of the Dark Lord Sauron.  Gandalf caught him and decided that he would join Frodo in his quest to Crickhollow.
September 23: Sam and Frodo left Bag End and met Pippin Took.  He accompanied him.
September 24: Khamul and several other Nazgul were after Frodo in Woody End.  They were scared off by Gildor Inglorion, who supplied Sam, Frodo, and Pippin with food and told them to stay off the road.
September 25: The Hobbits were given dinner by Farmer Maggot.  Merry met them in Buckland.  In Crickhollow, Pippin and Merry told Sam and Frodo that they planned on coming with them.
September 26: The four Hobbits left the Shire and traveled through the Old Forest where they were attacked by Old Man Willow and Sam saved Frodo from drowning in the Withywindle.  They met Tom Bombadil and his wife Goldberry and were housed by them.
September 28: The companions entered the Barrow-downs and were nearly struck by a Barrow Wight.  Frodo summoned Tom Bombadil to save them.  They also collected each collected a mighty sword.
September 29: The companions arrived at Bree where they did not find Gandalf.  They met Aragorn, whom Frodo decided to trust, though Sam remained suspicious of him.
September 30: Sam left with his companions, at this point including Aragorn.  Sam became attached to his new pony, Bill.
October 6: Frodo was stabbed on Weathertop by the Witch-King of Angmar.   Aragorn frantically drove the Nazgul away, and Sam and his friends escorted Frodo to the Trollshaws where Sam intended to cheer Frodo by telling him silly stories and showing him the troll statues.
Around October 24: All of the companions but Frodo arrived in Rivendell.  Frodo had been ridden ahead by Glorfindel.
October 25: Sam hid and spied on the Council of Elrond, which he was not invited to.  Frodo was, though, for he was the Ring-bearer.  It was decided that the Ring would be destroyed in Mordor.  Sam automatically jumped out of his hiding spot and joined the Fellowship of the Ring.
December 25: The Fellowship of the Ring departed from Rivendell.

3019
January 13: At the West gates of Moria, Sam and Frodo battled the Watcher in the Water.  Bill was released to Sam's horror.
February 14: Sam looked into the Mirror of Galadriel and saw the Scouring of the Shire.  He wanted to go back, but then decided to stay with Frodo until the very end.
February 16: The Fellowship set sail on the Anduin.
February 26: Frodo decided to leave the Fellowship and continue the quest alone, but Sam followed, insisting upon coming with him.
February 29: In the Emyn Muil, Gollum attacked intending to get the Ring.  While Sam wanted to kill the creature, Frodo spared him and made him promise to lead them to the Black Gate.
March 5: Sam, Frodo, and Golllum arrived at the Black Gate.  It was guarded by Orcs and Easterlings.  Gollum promised to lead them to a secret way, but Sam did not trust him.
March 7: As the companions went south through Ithilien, Sam saw an Oliphaunt being ridden by Haradrim. He recited his poem about it.  They were soon captured by Faramir.
March 13: Sam fought Shelob in Cirith Ungol.  Frodo was paralyzed and Sam believed him to be dead, so he took the Ring, intending to continue the quest alone.  Orcs took Frodo and revealed that he was alive.
March 14: Sam chased the Orcs to Cirith Ungol where he found Frodo and gave him the Ring again.
March 15: Sam and Frodo left Cirith Ungol and continued on their journey to Mount Doom.
March 18: Sam saw Gollum.  Frodo and Sam were whipped into a line of Orcs heading toward the Black Gate.
March 19: The two Hobbits stated confusion in the line in order to escape the Orc Inspector.  They continued across Gorgorath.
The next five days: The two companions got to Mount Doom.
March 25: Sam reminded Frodo of the Shire.  Frodo told Sam that the Ring was such a burden, he could not think of such places.  Sam carried him up Mount Doom until Gollum attacked.  Sam quickly wounded Gollum and followed Frodo into the Chamber of Fire.  Sam encouraged Frodo to cast the Ring away, but he could not willingly do such.  Gollum knocked Sam out and faught Frodo, eventually falling into the fire with the One Ring, which was destroyed, as was Sauron.  Gandalf and the Eagles saved the companions.
October 30: The returned to the Shire to find it in ruin.
November 2: Sam saw Rosie and her brothers as well as their father Tolman.  All of them wanted the Ruffians out.

May 1, 3020
Sam was wed to Rosie Cotton and the two inherited Bag End from Frodo.


3021
March 25: Sam had his first child, a daughter named Elanor.
September 21: Sam went with Frodo to the Grey Havens.
September 29: Frodo left Middle-Earth for the Undying Lands.  Sam returned to the Shire.

13
King Aragorn named Sam a Counsellor of the North-kingdom.

15
Sam's tenth child, a son named Bilbo, was born.
Aragorn visited Sam and gave him the Star of the Dunedain.

33
Sam's first grandson, Elfstan Fairbairn, was born to Elanor and her husband Fastred.

Sam was called many things throughout his history.  Here is a record of them all.

Perhael:
Perhael means "half wise" in Sindarin.  Sam was called this on the Field of Cormallen. 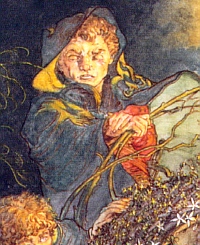 Sean Astin portrays Sam in the New Line Cinema film Trilogy of The Lord of the Rings directed by Peter Jackson.
The three paintings in the gallery are all of Sam.  The one on the top left is by artist Alan Lee, on the top right of the gallery is a painting of Sam with his sword by artist John Howe, and the bottom painting is of Sam by artist Michael Kaluta. 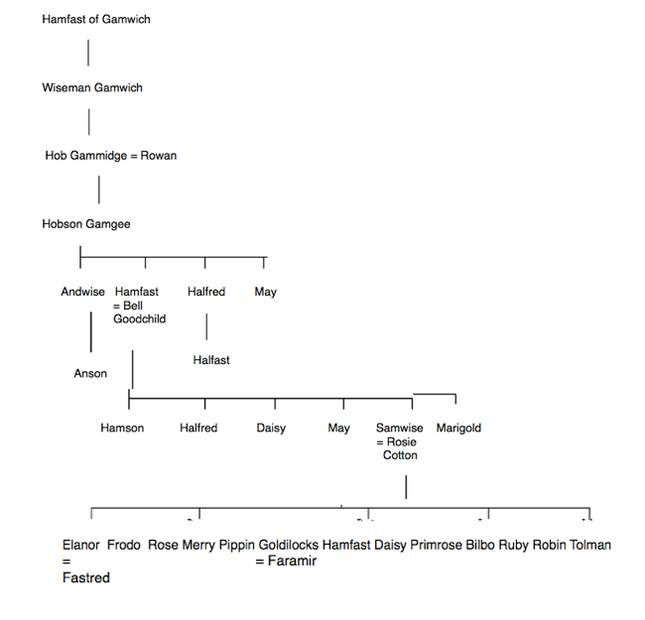