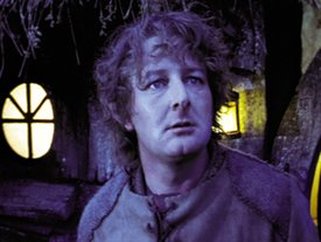 Farmer Maggot played by Cameron Rhodes in the New Line film
Hobbit-farmer of magnificent mushrooms.  Farmer Maggot lived on Bamfurlong in the Marish.  Farmer Maggot was the owner of a large plot of land between the Brandywine and Woody End in the Shire.  Besides mushrooms, Maggot grew turnips and other vegetables.  He lived in a large brick house with a thatched roof.  Farmer Maggot was a broad man with a wide face.  He had a wife and three daughters and several sons as well.
When Frodo Baggins was young, he lived near Farmer Maggot in Buckland.  Frodo often stole the farmer's mushrooms, earning himself a reputation as something of a rascal.  Frodo the young rascal moved away from Buckland after his parents' deaths.
When Frodo, Sam, and Pippin walked into Farmer Maggot's farm in September of 3018 of the Third Age, they grew worried.  By this time, Farmer Maggot was a strict, older Hobbit.  Luckily for the trio of Hobbit companions, the farmer was kindly and took the three Hobbits into his home for dinner.  Frodo told the farmer and his wife Mrs. Maggot about the quest Frodo and his companions were taking by leaving the Shire.  Farmer Maggot warned them to be careful, for he had encountered a tall man in a black cloak who had asked him about "Baggins, Shire!"  Farmer Maggot told the cloaked Nazgul that he was in the wrong part of the Shire, for the Baggins family lived in Hobbiton.  The black rider told the farmer that "he [Frodo] has left."  The farmer said that he would let his angry dogs Fang, Grip, and Wolf out if the rider did not leave. The rider left in a hurry.
Frodo and his companions were frightened by the farmer's encounter.  After dinner, Farmer Maggot took the Hobbits to the Bucklebury Ferry.  Frodo, Sam, and Pippin were soon reunited with Merry, who had been waiting at Crickhollow with Frodo's belongings.
Farmer Maggot's fate is unknown after his encounter with Frodo is not known.

Though a Maggot is generally a word for a grub or a larval insect, it is said in "Nomenclature of The Lord of the Rings" that this was not the intended meaning.
Farmer Maggot's first name is not known.