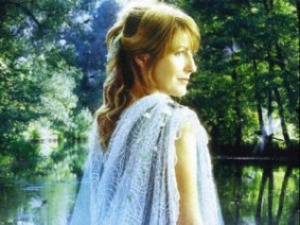 Amanda Niel as Goldberry - Decipher Card designed by Weta
Beautiful woman associated with nature.  Goldberry became the companion of Tom Bombadil.  Goldberry's extreme beauty could be compared to that of a fair Elf-maiden.  Like Tom Bombadil, Goldberry's origins were obscure, but she was likely some sort of water-spirit because that seems to be what her mother was.
Goldberry once lived in the Old Forest with her mother, the River-woman.  Goldberry's mother was some sort of water-spirit, possibly a naiad, who lived in a pool in the Withywindle River.  Goldberry lived in this pool with her mother.  She was once swimming in the River Withywindle when Tom Bombadil stood over it.  She pulled him into the river, and later he took her to his house and she became his life long companion.  Tom would walk down to Goldberry's former home in the Withywindle River at the end of each summer, and he would collect water lilies for her.  Goldberry kept these water lilies alive in bowls of water during the winter.
On September 26, 3018 of the Third Age, Tom returned from his lily-gathering with Frodo Baggins, Sam Gamgee, Pippin Took, and Merry Brandybuck.  The Hobbits were enchanted by Goldberry's earthy beauty.  Goldberry identified an inner beauty inside Frodo, and she called him "elf-friend."  When Frodo asked Goldberry about Tom, she called him the Master of the trees, the water, and the hill, and she said that "he is."
On September 28,  the Hobbits left the company of Tom Bombadil and Goldberry.  Goldberry wished the Hobbits safe and quick travels through the Barrow-downs, and she waved them farewell, her beautiful golden hair flowing behind her.
The Hobbits were sure enough captured by a Barrow-wight later that day and Tom Bombadil rescued them.  When Tom Bombadil emptied the barrow of its treasures, he found a brooch set with blue stones that had once belonged to a fair lady who had died long ago.  Tom brought this brooch home to his wife.

Goldberry was so named because of her beautiful golden hair.  She was also called River-daughter because she was the daughter of the River-woman.