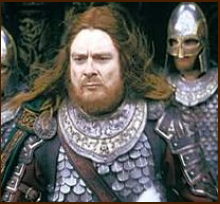 John Leigh as Hama in the New Line film
Doorward of King Theoden of Rohan.  On March 2, 3019 of the Third Age, Aragorn, Legolas, Gimli, and Gandalf  arrived at Edoras and Hama welcomed them at Meduseld.  He removed all of the visitors' weaponry before allowing them before King Theoden.
Aragorn hesitated before parting with his sword Anduril, but Hama convinced him that he would allow nobody to touch it.  The only weapon that slipped by Hama was Gandalf's staff.  Hama allowed Gandalf to come before King Theoden with his staff, believing it to be only a prop and a walking stick.
With his staff, Gandalf released Theoden from the influence of Grima Wormtongue, servant of Saruman.  Once this occurred, Hama was commanded to release the King's nephew Eomer from prison, and Eomer asked Hama to return him his sword Guthwine.  Hama did so gladly, as he was relieved that Theoden was no longer under the influence of evil.
Theoden ordered Hama to retrieve the King's sword Herugrim, which Theoden came to hold proudly again.  He also brought Grima before King Theoden for judgement.  Grima, now a known traitor, was given a choice:  he could either fight in the armies of Rohan or leave Edoras immediately.  Grima chose the latter option and left Edoras with haste.
Soon after, the people of Edoras were departing from their city for war with Saruman.  Hama suggested that Eowyn should remain in command of the city while the men were gone, and Theoden agreed.  The King sent Eowyn with the women and children to safety at Dunharrow.
On the night of March 3, Hama fought in the Battle of Helm's Deep against the forces of Saruman.  He was killed at the gates of the Hornburg, and his body was hewed even after death.  Hama was buried after the battle in a solitary tomb by the King himself.

The name Háma can be derived from the Old English word hám, meaning "home."  His official title was Doorward of King Theoden.  There was also an earlier noble of Rohan named Háma.