Legendary Lord of Dor-lomin captured by Morgoth and cursed.  As Tolkien himself remarked, Hurin was the greatest warrior of the First Age.
Hurin was born in the year 439 of the First Age.  He was the son of Galdor, Lord of Dor-lomin, and Hareth of the House of Haleth.  Hurin had a younger brother named Huor.  Hurin was the grandson of Hador, founder of the House of House of Hador.  Hurin was thus the heir of Galdor to the lordship of Dor-lomin.
As children, Hurin and Huor were sent to the Forest of Brethil to be raised by their mother's people.  They helped battle Orcs who tried to cross the River Teiglin.  In 458, Hurin and Huor battled against attacking Orcs at the River Sirion when they were nearly spotted by Orcs.  The great Vala Ulmo, Lord of Waters, created a mist to shield the brothers from the Orcs and thus saving their lives.  However, because of the mist, the brothers became lost until they were rescued by Thorondir, Lord of Eagles, and brought to King Turgon of the hidden realm of Gondolin.
The brothers were brought before the Elf-King Turgon.  Turgon loved the brothers as a father, but they wanted to go back to their father in Dor-lomin when they came of age.  Though traditionally no outsider who had found Gondolin was allowed to leave in fear of Morgoth finding the hidden realm, Turgon made an exception.  Hurin and Huor promised not to tell of where they had been.   Turgon's Eagles brought them back to their home in Dor-lomin.
In 462, Morgoth invaded Hithlum and Hurin's father Galdor was killed during the assault.  This left Hurin to be Lord of Dor-lomin and thus Lord of the House of Hador, now the greatest of the three Houses of the Edain.
In the spring of 464, Hurin married Morwen of the House of Beor. They had two children: Turin born later in 464 and Urwen, who became known as Lalaith, born in the spring of 466.
In 469, Morgoth sent forth a deadly wind from Angband called the Evil Breath.  The Evil Breath hit Dor-lomin and both Turin and Lalaith became ill as a result.  While Turin eventually recovered, Lalaith died from the sickness and Hurin's wife Morwen was greatly saddened.  However, by 472, Morwen had fallen pregnant with another daughter whom she named Nienor.
In 472, the majority of able-bodied Elves and men residing in Beleriand were called to fight in the Battle of Unnumbered Tears.  Both Hurin and his brother Huor fought in the host sent forth from Dor-lomin.  Huor was pierced through the eye by and an orc arrow after having retreated across the Rivil and he was killed.  At midsummer, Hurin was captured by Morgoth.
Morgoth cursed Hurin and his family and imprisoned him in the Thangorodrim.  Hurin was tortured by Morgoth's servants for  the location of the hidden city of Gondolin, which Morgoth felt was necessary to obliterate.  Hurin refused to give the enemy information.
Hurin endured many years of tragedy.  All of Hurin's children died.  He watched as only Gondolin remained, and sorrow infested his soul.  Though he was allowed to live, he would have welcomed death instead of his suffering.
In circa 500, Morgoth released Hurin from imprisonment.  In 501, Morwen wandered until she found the gravestone of her children in the Forest of Brethil.  Though feebly old, Hurin found his wife there and they were reunited for a short time.
At sunset that very day, Morwen died.  Her gravestone stood tall, and even after the destruction of Beleriand, it remained an island in the Sea.
Hurin was left with nothing and no cause for life.  He drowned himself in the Sea. 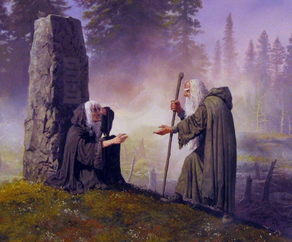 Hurin and Morwen are reunited, by Ted Nasmith

The name Húrin means "steadfast" in Sindarin.  Hurin can be derived from the elements hûr meaning "vigor" and inn meaning "inner thought/heart."  Hurin was also the name of a much later Steward of Gondor as well as Hurin of the Keys, and Hurin I & II of Gondor.

In an earlier version of the legendarium, Hurin was called Chúrind.   He was also called Húrin Thalion, Thalion meaning "hardened" due to Hurin's strong spirit.