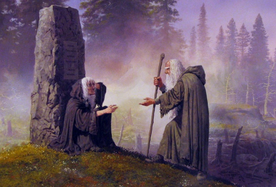 An aged Morwen reuniting with Hurin, by Ted Nasmith
Wife of Hurin, mother of Turin.  Morwen was born in year 443 of the First Age.  She was the daughter of Baragund of the House of Beor.  In her youth, Morwen lived in Dorthonion with her people.  She was a particularly beautiful woman.
Morwen was remembered as one of the most beautiful women to live in the First Age.  She had pale skin, dark hair, and grey eyes.  Morwen was a tall and proud woman.
In 455, the land of Dorthonion was scorched by the evil of Morgoth in the Battle of Sudden Flame.  Prior to the battle, Morgoth sent forth rivers of fire from Angband that turned Dorthonion's forest into an evil wood called Taur-nu-Fuin.  During the battle, Morwen's grandfather Bregolas was slain and his brother Barahir became Lord of the House of Beor.  He refused to retreat from Dorthonion.  Because of the threat still lurking in Dorthonion, his wife Emeldir led the women and children out.  Morwen, only thirteen at the time of her evacuation in 456, went to live in Dor-lomin in Hithlum with her cousin Rian.  Her father Baragund did not accompany them; he was killed by enemy forces in 460.
In 464, Morwen married Hurin, Lord of the House of Hador.  Later that year, their son Turin was born.  In the spring of 466, Morwen had a daughter named Urwen whom everyone called Lalaith, the Sindarin word for "laughter," because of her beautiful laughter.
In 469, Morgoth sent a deadly wind known as the  Evil Breath to Dor-lomin.  Turin and Lalaith both fell ill, but while Turin eventually recovered, Lalaith died.  She was only three years old at the time.  However, though Morwen was grieved by her daughter's death for a time, she fell pregnant with another daughter in 472.
In 472, Hurin fought with the men of the House of Hador in the Battle of Unnumbered Tears.  This battle was fought between the forces of Morgoth and the allies of the Noldor.  Morgoth's forces included Orcs and Balrogs, and the Noldor's forces included men of all three Houses of the Edain as well as Elves of Doriath and Nargothrond.  The alliance of Elves and men were led by Fingon, High King of the Noldor.
During the battle, Hurin was captured by Morgoth and imprisoned atop the Thangorodrim.  Since Morgoth was victorious in the battle, he sent his alliance of Easterlings to colonize Dor-lomin.  The Easterlings slaughtered many of the Edain as they raided their way across Hithlum, but they did not hurt Morwen because they thought she was a witch in the service of the Elves.
As Morwen suffered through years of poverty with her new daughter Nienor, who had been born in the early months of 473.  Shortly before Nienor's birth, Morwen sent her son Turin to be fostered by the Elf-Lord Thingol in Doriath.  Morwen and her daughter were aided by Aerin, a woman of the Edain forced to marry Brodda the Easterling.
Thingol sent many messages to Morwen requesting that she come to see her son in Doriath.  But Morwen was raising her infant daughter Nienor, so she could not go.  She also had pride for the homeland of her husband, and she did not want to run away from it, even if it was in utter ruin.  Morwen sent the Dragon-helm of the people of Hador to Turin.
Thingol asked Mowen to visit her son in Doriath until 481, when Morgoth's power made the road too dangerous for messengers.  In 484, Turin fought in a skirmish resulting in the death of the Elf Saeros, a jealous Elf who had insulted Morwen in an attempt to lessen Turin's power.  In 490, Turin went to Nargothrond to inspire the Elves there to drive Morgoth's allies out of Beleriand.  In 494, Morwen and Nienor went to Doriath in search of Turin but no one there knew what hadbecome of him, so they remained in Doriath for a time.
Nargothrond was attacked by the dragon Glaurung in 495, and this evil dragon lied to Turin by telling him that Morwen was enslaved in Dor-lomin.  Turin went to Dor-lomin to free her.
Survivors of the attack on Nargothrond arrived at Doriath in 496, and from them Morwen learned that her son had been there.  Thingol and his wife Melian strongly advised that Morwen not go in search of her son, but she left in secret.  When Thingol discovered her absence, he sent a company led by Mablung to retrieve her.  Nienor secretly left in search of her mother as well.
Nienor soon found her mother, and Morwen ordered her to return to Doriath.  Nienor did not obey her mother's orders.  But when they reached Nargothrond they found Glaurung.  Mablung's company crossed the Meres of Twilight while pursuing them.  But Glaurung released an enchantingly evil fog and Mablung's horses all galloped away in fear.  Morwen was able to escape the speel but went wandering for nearly the rest of her life.  Nienor did not escape the spell, and Glaurung gave her amnesia and she forgot her true identity.  Nienor ran off into the forests nearby and never saw her mother again.
In 501,  Hurin was released from Thangorodrim and he was reunited with his wife in the Forest of Brethil.  Morwen died at sunset, and Hurin cast himself into the Sea because he felt no other reason to live.
When Beleriand was destroyed and sunk beneath the Sea during the War of Wrath, Morwen's gravestone still stood above the Sea as an island off the coast of Middle-Earth.  The island became known as Tol Morwen.

Morwen is Sindarin for "dark maiden." It can be derived from mor meaning "dark" in Sindarin and wen meaning "maiden."  Her alternative name was Eledhwen, which means "Elfsheen" in Sindarin from eledh from edhel meaning "Elf" and wen meaning "maiden."  During their invasion of Dor-lomin, the Easterlings called her Witchwife in fear of Morwen being an Elvish witch.
Morwen was also the name of the grandmother of Egalmoth of Gondor in the Third Age and Theoden's mother Morwen Steelsheen of Lossarnach.