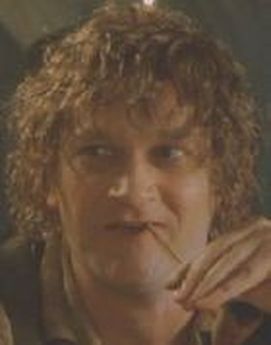 Brian Sergent as Ted Sandyman in the New Line film
Ted Sandyman was a Hobbit of the Shire who was allied with the Ruffians and Lotho Sackville-Baggins during the scouring of the Shire and the Battle of Bywater.  Ted Sandyman was the son of Samdyman the Miller.  Ted's father was a miller who owned the Old Mill in Hobbiton.
Before the quest to destroy the One Ring in 3018 of the Third Age, Ted was talking to Sam Gamgee in a pub called the Green Dragon in Hobbiton.  Sam said that his cousin Hal had seen a moving tree in the North Moors, the northernmost moors in the Shire.  Ted claimed this talk was foolishness.  He said that their was no such thing as walking trees, and referred to the story as "children stories."
In 3019, Sandyman's mill was torn down and replaced with a New Mill that was used for industrial purposes.
On November 3, 3019 of the Third Age, Ted fought alongside the Chief's men in the Battle of Bywater.  When Merry informed him that the Chief's men were defeated and were going to be removed from the Shire, Ted was awestruck.  Merry then sounded the Horn of the Mark and many Hobbits came ut of their homes and removed the Chief's men from the Shire.  Ted's fate is unknown, but it is known that the New Mill was torn down after the removal of the Ruffians.