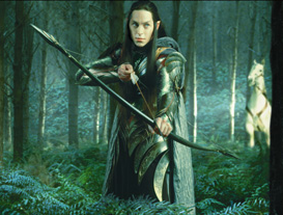 Decipher Card of Elladan
Twin brother of Elrohir; son of Elrond of Rivendell.  Elladan was born in year 130 of the Third Age along with his twin brother Elrohir.  He was the son of Elrond, Elf-Lord of Rivendell, and Celebrian, the daughter of Lord Celeborn and Lady Galadriel of Lothlorien.  Elladan was a skilled warrior.  He was tall and had dark hair and grey eyes.
Elladan's sister Arwen was born in 241 of the Third Age.  Elladan was raised in Rivendell and trained to be a great archer.  He and his twin often would travel from Rivendell to Lothlorien whilst hunting Orcs in the Misty Mountains.
In 2509, Elladan's mother Celebrian was traveling from Rivendell to Lothlorien to visit her parents.  She was attacked and tortured by Orcs, nearly being killed.  Elladan and his brother soon found her and killed the Orcs, but Celebrian had been emotionally wounded by the assault and in 2510 she and her husband decided that she would go to the Undying Lands.
In October of 3018, Elladan accompanied Aragorn from Rivendell to see what had caused the Nazgul to be defeated at the Ford of Bruinen.  He then, with his brother, journeyed to Lothlorien to inform his grandparents of the decision made at the Council of Elrond: the One Ring would be destroyed in Mount Doom in Mordor from whence it had come.
In 3019, Aragorn took the Paths of the Dead to summon an army of Dead to help defeat the invading forces of Sauron.  The Grey Company followed Aragorn.  The Grey Company was a small army of men and Elves led by Halbarad of Arnor and comprised of both Elladan and Elrohir among others.
They Grey Company and the army of Dead marched south to Pelargir where they overtook the fleet of Corsair ships sent by Sauron to attack Gondor.  The Grey Company sailed the ships north to Minas Tirith.  They arrived on March 15 and they helped the poeple of Gondor win the Battle of the Pelennor Fields.  Elladan and his brother wore stars on their brows into battle.
After the battle was won, Aragorn gave the Elendilmir to Elladan and Elrohir for safe keeping.  Elladan and his brother then helped Aragorn bring the wounded to the Houses of Healing and helped heal their wounds.
On March 16, Elrohir announced to the captains of Gondor and Rohan that he and his brother were prepared to march to war against Sauron to give Frodo time to destroy the One Ring, ultimately defeating Sauron.  Aragorn agrred and the forces of the West marched to war on March 18.  Elladan and Elrohir rode to war with a company of knights from Dol Amroth.  The Host of the West engaged the forces of Sauron in the Battle of the Morannon until March 25, when the Ring was destroyed and Sauron and his realm fell.
On April 8, Elladan and Elrohir went to the celebration of the West's victory on the Field of Cormallen. The brother left Minas Tirith one month later and went back north to Rivendell, only to return on Midsummer's Eve to escort their sister to her wedding.  Arwen married King Aragorn the following day.
In July, Elladan and his brother went to Edoras to attand the funeral of King Theoden.  On August 14, they bid farewell to their beloved sister Arwen.  While Elrond left Middle-Earth for the Undying Lands in 3021, Elladan and Elrohir remained in Rivendell.  They still needed to decided whether they wanted to remain in Middle-Earth and die their with men or whether they wanted to go to the Undying Lands and live forever with their kin.  Their decision is unknown.

The meaning of the name Elladan is not certain.  The first element, el, means "star."  The second element, adan, is the singular of Edain.  The Edain were a culture of men who lived during the First Age.