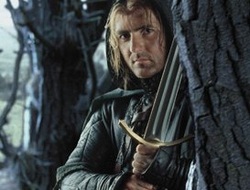 Decipher Card of Halbarad
Ranger of Arnor who guarded the Shire from attack.  Halbarad was a Dunedain who came from Arnor but relocated to Eriador in order to guard the borders of the Shire.  Halbarad understood that the Hobbits of the Shire knew nothing of the work the Rangers did to protect them.  Halbarad was born and raised in Arnor at the end of the Third Age.
In 3019 of the Third Age, Halbarad gathered a force of thirty Dunedain warriors to aid Aragorn, the Chieftain of the Dunedain.  This army became known as the Grey Company, and they were joined by Elrond's twin sons Elladan and Elrohir.  The Grey Company met Aragorn in Rohan at the River Isen on March 6, 3019.  Halbarad gave Aragorn a message from his betrothed Arwen.
That night, Halbarad and Aragrorn climbed to a chamber of altitude in the Hornburg and Aragorn looked into the palantir and showed himself to Sauron.  Aragorn inspired fear in the heart of the free peoples' key opponent, and hope remained for the West.  The next morning, Aragorn wished to enter the Paths of the Dead to summon an army of Dead to overtake the Black Ships who sailed to attack Gondor.  Halbarad warned that the paths were a dangerous place where no one ever returned from.  However, on March 8, Halbarad overcame his fear of the Dead and entered their lair with Aragorn.
At midnight, Aragorn reached the Stone of Erech and summoned an army of the Dead to fulfill their oaths to Gondor.  Aragorn, Legolas, Gimli, the Dead, and the Grey Company went to Pelargir where they overtook the fleet of Black Ships and sailed up the Anduin to Minas Tirith.  It was there that the Battle of the Pelennor Fields was taking place.  On March 15, the fleet reached the city and Aragorn revealed the White Tree on the banner of Gondor, and from the ships came the Grey Company.  Halbarad fought valiantly and bore a standard given to him by Arwen.  He was slain in battle that day.