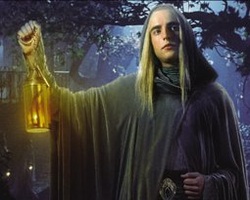 Decipher Card of Gildor
Elf who encountered Frodo Baggins and his companions in the Shire.  Gildor Inglorion may have been born in the First Age or prior.  He told Frodo that he was of the House of Finrod, but he may have actually been of the House of Finarfin.  Either way, he was a very ancient and had lived through the ages.
Gildor Inglorion met Frodo Baggins on September 24, 3018 of the Third Age while leading a group of Elves on their final journey in Middle-Earth.  Because the Elves sang as they walked, the Nazgul that were pursuing Frodo and his companions were scared away.  Gildor knew who Frodo was because of his resemblance to his cousin Bilbo, who had moved to Rivendell in 3002.
Gildor allowed Frodo and his companions Sam Gamgee and Pippin Took to spend the night with the Elves.  The Elves gave Frodo, Sam, and Pippin food, drink, and a night of safe rest.
Frodo did not sleep very much that night.  He conversed with Gildor deep into the night, and greeted him saying "Elen síla lúmenn' omentielvo," Ancient Elvish for "A star shines upon the hour of our meeting."  Gildor named Frodo a friend to the Elves because of his knowledge of and friendliness towards them.
Gildor was able to see the forces of the great enemy Sauron were pursuing Frodo.  Because he was not sure why, he was reluctant to give Frodo counsel.  He also dared not advise Frodo against the will of Gandalf, who was not present.
Ultimately, Gildor did advise Frodo to move hastily out of the Shire and to Rivendell as soon as possible.  He promised to inform all of his Elven allies of Frodo's quest, and he assured Frodo that the Elves would look out for him.  Gildor also told Tom Bombadil of the Old Forest and Aragorn, both of whom were able to aid Frodo and his companions.
Gildor continued on his way to farewell the lands of Middle-Earth.  He and his followers were traveling through distant lands to say his final farewells.  On September 22, 3021, Gildor was reunited with Frodo in the Grey Havens, and they traveled together along with Elrond, Galadriel, Celeborn, and Gandalf over the Sea to the Undying Lands in the West.

The name Gildor may mean "noble star" from the Sindarin gil meaning "star" and dor from taur meaning "noble."  Inglorion may mean "son of a golden heart" in Quenya from indo meaning "golden," glor meaning "heart," and ion meaning "son of."