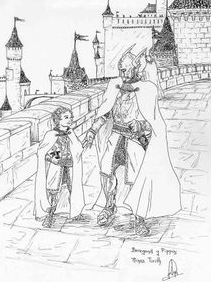 Sketch of Beregond and Pippin
Soldier of Gondor.  Beregond was a Guard of the Citadel of Minas Tirith during the War of the Ring in the Third Age.  He was the son of Baranor, and may have also been the brother of Iorlas.  Beregond was likely raised in the vales of Lossarnach in the White Mountains, but this is uncertain.  At the time of the war, Beregond had two sons: Bergil and Borlas.  Bergil, the elder of the two, was 10 years of age.
Beregond was possitioned in the Third Company of the Citadel.  He was particularly loyal to Captain Faramir, the mistreated son of the Steward named Denethor II.  Beregond pitied him, but also he envied his strength as a leader and his great knowledge.  Beregond thought Fararmir a natural leader of men.  Though he was not well-travelled, Beregond was aware of the threat from Mordor made by Sauron and also the situations of Gondor's numerous fiefdoms.
On March 9 of year 3019, Third Age, Beregond was instructed to take command of Pippin Took, a Hobbit and the newest guard.  Beregond had never met a Hobbit before, so he was curious to meet one.  He was surprised by Pippin's childish appearance yet he saw much experience and courage in his new fellow guard, more so than many of the men he knew.
On March 10, Beregond became very worried about Faramir.  Faramir returned to Minas Tirith from Osgiliath while in pursuit of the Nazgul.  He was one of the few survivors, and Osgiliath was lost.  Denethor ordered Faramir to retake Osgilaith, and in doing so Faramir nearly died.  He returned with little life left.  On the night of March 13, Beregond noticed that there was a faint glow from the Tower of Ecthelion, and he feared that Denethor was having a confrontation with Sauron.  In truth, Beregond was correct, as Denethor was using the Anor-Stone.
On the morning of March 15, Pippin rushed to the Citadel to inform Beregond that Denethor was going to burn Faramir alive.  The Guards of the Citadel were not permitted to abandon their duty, under pain of death.  But Beregond chose to face that threat in order to save his Captain.  He hurried up the Silent Street and into the House of Stewards where he found Denethor's funeral pyre.  Two of Denthor's servants were trying to light it, and Beregond had no choice but to kill them.  He frightened the others off and then waited for Gandalf to arrive.
Gandalf saved Faramir from the pyre, and Denethor charged at him with a knife.  Beregond prevented his lord from killing Faramir, and with that Denethor committed suicide by setting himself aflame.  Gandalf granted Beregond with the keys to the Houses of Healing, where he would bring the wounded Faramir.  Gandalf also recommended to the Chief Guard to let Beregond watch over Faramir while he was wounded.  Beregond was at Faramir's bedside when he awoke.
After the Battle of Pelennor Fields was won, an army of the combined forces of Gondor and Rohan was gathered.  It was led by Aragorn.  The army would march to the Black Gate of Mordor to wage war upon Sauron on March 18.
The Host of the West reached the Black Gate on March 25 and the Battle of Morannon began.  The purpose of waging war with Sauron was not to win by military means, but to provide time for the Ring-bearer, Frodo, to destroy the One Ring in the fires of Mount Doom, which would bring about the downfall of Sauron and his realm.  This mission was eventually successful.  During the battle, Beregond was positioned in the front ranks alongside Pippin.  Pippin rescued Beregond from a large chief Troll who had nearly slain him.
On May 1 at the crowning of King Aragorn, Beregond was brought before the King to face charges for abandoning his post during the Battle of Pelennor Fields to save Faramir.  Though traditionally any guard of the Citadel who left their post while on duty was executed, Beregond was spared.  He was made the Captain of the White Company, the Guard of Faramir.  Beregond relocated to Emyn Arnen in Ithilien to work personally for Faramir.